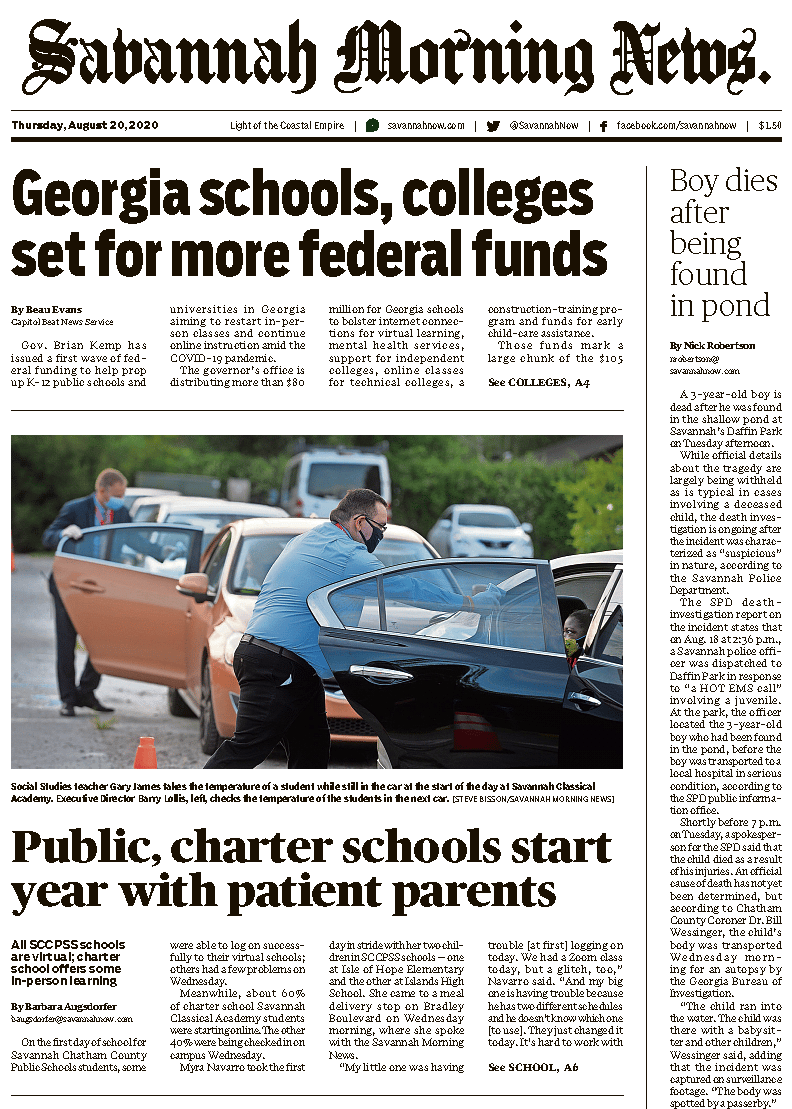 On the first day of school for Savannah Chatham County Public Schools students, some were able to log on successfully to their virtual schools; others had a few problems on Wednesday.

Meanwhile, about 60% of charter school Savannah Classical Academy students were starting online.The other 40% were being checked in on campus Wednesday.

Myra Navarro took the first day in stride with her two children in SCCPSS schools — one at Isle of Hope Elementary and the other at Islands High School. She came to a meal delivery stop on Bradley Boulevard on Wednesday morning, where she spoke with the Savannah Morning News.

“My little one was having trouble [at first] logging on today. We had a Zoom class today, but a glitch, too,” Navarro said. “And my big one is having trouble because he has two different schedules and he doesn’t know which one [to use]. They just changed it today. It’s hard to work with two kids. I have them in two rooms and one calls, ‘Mom! I need you!’ and I go running [to help].”

Meal delivery is by school bus for the duration of virtual learning — a logistical coordination between the nutrition and transportation departments that seems to have all the choreography of a well-rehearsed dance. Meals that had been prepared and bagged during the past two days were loaded onto the buses beginning at 7 a.m. Deliveries will continue Thursday and Friday this week. The full schedule of deliveries is available on the sccpss.com website and will be updated weekly.

Many new protocols and procedures have been implemented on the campus to keep students and staff safe.

Students had their temperatures checked even before exiting their parents’ cars. Students were grouped by home rooms and led into the buildings in small groups. Students had to wear masks. Instead of a reassuring hug, kindergartners received encouraging cheers through a fence.https://a22b3c5250e2753dbe70d697e1745ba2.safeframe.googlesyndication.com/safeframe/1-0-37/html/container.html

‘Afternoon was better than the morning’

School District 7 board member Michael Johnson has a son in second grade at Charles Ellis K-8 Montessori School. Because his son already had a computer, Johnson did not request a Chromebook from the district. “We had some issues with Zoom on his computer where he was halfway through his morning meeting and [the] audio and his mic conked out, so I had to completely do upgrades on my laptop, that way he [could] be a part of it,” Johnson said. “By the time I got that up and running, the morning meeting was basically over. So we had to contact the teacher to find out what he needed to do.”

Johnson said that he heard from several people having issues with a computer log-in or connectivity. “Xfinity crashed all over the county,” he said at one point. However, problems seemed to be fewer as the day wore on. “From what I’ve heard from the public was that the afternoon was better than the morning.”

“District personnel are aware of the issues. They all have attempted to do what they can on their end of it, to remedy the situation,” said Johnson. “It’s kind of like Whack-a-Mole. Every time you hit one, another one pops up.”

He added that parents don’t have to go it alone. “If anybody needs help, the first line of defense is to contact the teacher. The teacher will know where to direct them,” advised Johnson. “Board members are aware of a lot of situations and [will] also work and help as well.”